On failing at six years of Daf Yomi

August 08, 2018
On August 3, 2012, I began a journey.  Opening up Tractate Brachot, I started reading, studying, skimming, glossing over, skipping, focusing on a page of Talmud a day.  Over the last six years, I have discovered the sources of many Jewish traditions, found old friends (sugiyot I had previously studied) and simply found myself exposed to more Talmud than I could ever have imagined.

I have had friends begin and quit.  I've thought about quitting dozens of times.  I've been days and weeks behind.  I've listened to podcasts that have come and gone.  Tweeted on and off @tweetedtalmud Deep thoughts have been inspired and incredible frustration at sacrifice and misogyny has been part of my daily life.  I've commemorated and commiserated with Facebook: Unorthodox Daf Yomi and read articles from all around the world.

Tablet Magazine this week had an article that spoke of some of the adventures and challenges of Daf Yomi:

Six years ago, Tablet’s Adam Kirsch began his reading of Daf Yomi, the page-a-day cycle of oral law and rabbinic exegesis that covers all 2,711 pages of the Babylonian Talmud. The current cycle is the 12th Daf Yomi. It will be completed in January 2020. The 13th begins the following day. As it never ends, we only pause here, as on the banks of a great river, to take stock.
This is more or less what Kirsch has been doing, reading this mysterious and profound and profoundly mysterious text a bit at a time, and taking stock. Once a week for these past six years, Kirsch has written a dispatch on the past seven days of text. He claims to have undertaken this in a spirit of modesty—”And I hope this column will be not anything so presumptuous as a commentary or an exegesis, but simply a record of one Jewish reader’s encounter with the Talmud”—he wrote at the beginning, even taking for himself the humble title “reader” to distinguish his own endeavor, solitary and literary, from the “learning” that goes on among Yeshiva boys.
https://www.tabletmag.com/scroll/267871/six-years-of-farts-magic-and-misogyny

My Jewish life has been enriched by this regular study.  Almost a decade ago I remember sitting with Rabbi Neil Gillman in his office.  This was a regular activity for me.  If I wasn't in class or studying or working or with my wife, I was probably with Neil.  While sitting at his feet, smelling the sweet pipe tobacco (when he still smoked), he said to me, "Philip, you have to keep studying when you leave here.  Otherwise in a few years you will burn out.  You will have given everything and will have nothing left."  There was more to the conversation, speaking of the importance of refilling the well.  While I always believed in the importance of continual study, his words resonated.  He might have preferred me to read more philosophy, but was always happy to discuss my obsession with the varieties of Jewish liturgy!  (He also knew how much I coveted his shelves of siddurim from across the Jewish world--I'm happy to have emulated that and in my new office at CBI have an entire bookcase-floor to ceiling filled with prayer books of different movements and nusachot.) 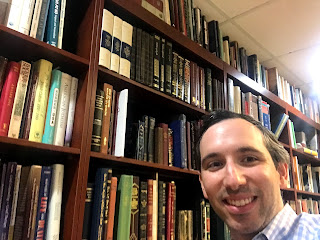 Even studying the Talmud on a very superficial level these last few years, I have absorbed so much.  Certain tractates--like Brachot, Pesachim, Rosh Hashanah, Yoma, Sotah, have been more moving to me than others.  Zevachim has been a painful slog--yet even amidst the details of bird sacrifices and the proper way to drain a bird's blood for the altar there have been interesting asides about Noach, the power of the ark, Nadav and Avihu, how Rachav slept with almost everyone in the known world, and how the Revelation at Sinai had the Canaanites so terrified that they became impotent.  Earlier on in this Tractate, there was a conversation about Pikuach Nefesh and medicine on Shabbat that contradicted much of what I thought Jewish practice was.

Yet I think the lesson I have learned more than any other is around failure and resilience.  I have missed many pages (will have to do this again next cycle!).  I have tried to catch up and discovered that sometimes, I just have to skip ahead.  Sometimes one simply can't catch up if you miss too large a chunk.  Life has happened amidst the Talmud study.  I have had two children.  I have moved.  I have grown as a rabbi.  I have gained so much experience in the pulpit and in life.  My life experience has changed how I read the Talmud and how I read the Talmud has changed how I live my life.  It helped inspire me to make the big change of relocating my family to St. Petersburg.  Finding a community that was passionate about daily prayer and regular study was important to me.  I feel so blessed to have found CBI.