Fighting for the Marginalized

Shabbat Shalom and Pride Sameach, Happy Pride! This year pride marks the 50th Anniversary of the Stonewall Riots in New York City. The moment many see as a turning point for the Queer Liberation Movement in the United States. I likely, do not need to explain what happened at Stonewall to many here tonight and this brief description will likely be insufficient, but here are the important things to know:

In the early hours of June 28, 1969, New York City police raided the Stonewall Inn, a gay club located in Greenwich Village in New York City. The raid sparked a riot among bar patrons and neighborhood residents as police roughly hauled employees and patrons out of the bar, leading to six days of protests and violent clashes with law enforcement outside the bar on Christopher Street, in neighboring streets and in nearby Christopher Park.  https://www.history.com/topics/gay-rights/the-stonewall-riots

The Stonewall Inn was a bar frequented by some of the most marginalized people in our community - People of Color, drag queens, trans folks, homeless youth, sex workers, etc. - because Stonewall would let anyone in (unlike bars where racism and anti-femme oppression kept many out) and the cover charge was very low. It was these, the most at-risk members of our community, who rose up, and said, no more. https://www.facebook.com/search/top/?q=Stonewall%20was%20a%20riot%20sex%20workers&epa=SEARCH_BOX

Marsha P. Johson, a trans woman of color is known for throwing the first brick at a police car during these riots. I mention that because in 1960s and 1970s NYC trans people, drag queens, femmes, and butches were particularly targeted. A regulation gave police license to arrest folks wearing “fewer than three articles of clothing appropriate to their sex” and it was the police who decided what, “appropriate to their sex” meant.

While this is no longer law in the U.S., how many of us have heard, “I am fine with you being gay but do you have to throw it in our faces?” Translation, “Keep the sparkles, the rainbows, the glitter, the suspenders, the bow ties at home. Don’t be too femme. Don’t be too butch. The more I can pretend you are straight the more comfortable I will be.” Or sometimes in my case, “Well, you should strive to be ‘A rabbi who happens to be queer’ not ‘The queer rabbi.’”

And yet, we see in this week’s Torah portion, Beha’alotcha, otherness, difference is at the very least accepted if not celebrated. Moses feeling the burden of leadership for an entire people pleads to G!d for help. G!d responds by telling Moses to bring 70 elders to the Tent of Meeting outside of the camp so G!d can give them some of the רוח the spirit Moses has. So 68 of these 70 elders go with Moses while our two dads in this week’s Torah portion, Eldad and Medad, stay behind in the camp. You might think because they stayed behind they do not get this gift of Moses’ spirit, but Joshua, Moses’ attendant who has been with Moses since his youth comes running exclaiming, “Eldad and Medad are prophesying in the camp. Restrain them!” Showing this prophetic spirit Moses has, that was just put into the 68 elders with him, was also put into Eldad and Medad. Moses responds to Joshua, “Why are you so upset, I wish all of G!d’s people were prophets.”

Joshua, the person who will take over leadership of the people fully believes Moses should be the only prophet. He sees it as a great offense that two people would dare to prophesize. He wants them restrained and arrested. Moses responds, “We need more people like them.”

Later is this week’s Torah portion, Miriam and Aaron speak out against Moses because he married a black woman and/or a woman from another land. “Miriam and Moses spoke against Moses because of the Cushite woman he had married…They said, “Has the Divine spoken only through Moses? Has G!d not spoken through us as well?” G!d hears this and responds by telling Miriam and Aaron just how different the Divine’s relationship is with Moses than any other prophet and punishes Miriam.

It seems the Divine is more concerned with them speaking out against Moses than the potential racism or xenophobia in this passage. Biblical commentators and rabbinic imagination do their best to show how this was not about racism nor xenophobia, but sticking with the pshat, just the events of the biblical narrative, Miriam speaks out against an outsider and is punished for it.

We see in this week’s parsha both human and divine protection of the outsiders, of the people breaking norms. Even when the claims come from Moses’ trusted friend Joshua, “These two are behaving inappropriately arrest them” or from his own sister, “This woman is a Cushite, she’s not like us” the response is, “We want them here. They belong.”

Recently an image of Marsha P. Johnson has been going around social media with this caption by Kadence Cole:

Thankfully so much has changed in the United States because of the incredible activists and organizers who have come before us and who are working tirelessly today for LGBTQ liberation.

And yet, throughout this year this administration has been chipping away at our rights and individuals continue to target us; so far 10 trans people were murdered this year that we know about and another died just after being released from Immigration and Customs Enforcement custody. We do not know what happened to them while in ICE custory. Two months ago the military ban of transgender service members went into effect, 10 states can still bar queer people from adoption, the Supreme Court is going to decide whether or not the Civil Rights Act of 1964 protects us from workplace discrimination and along with all of this so many of us know the fear of hate fueled violence. Many of us spent June 12th and 13th reflecting on, grieving, remembering the 49 people we lost in the Pulse Nightclub shooting. In short there is still a lot of work to do.

This weekend is a weekend to celebrate. A weekend where hopefully those of us who wish can freely embrace the glitter, the sparkles, the rainbows, the suspenders, the bowties, the butch, the femme without the internalized and externalized queer and transphobia that comes with it. Perhaps someone in this room will use this weekend to come out for the first time, express their true gender for the first time, try drag for the first time. Perhaps there are others in this room who are not ready. Who due to the queerphobia and/or transphobia in their family, religious communities, friend groups are not safe to come out yet. Perhaps there are other oppressions keeping folks from Pride; I will admit hearing that white supremacists and Neo-Nazis protested Detroit Pride with a police escort two weeks ago made me question my safety as a Jew at Pride this year. So too, I have heard racism inside and outside the LGBTQ+ community and concerns around police brutality keeps our Jewish and non-Jewish black, brown, and immigrant community members, friends, and family, away from Pride

For those who are celebrating Pride, my blessing, my wish, my hope for you is that just like we see in this week’s Torah portion at Pride and all throughout the year make room for, uplift, amplify and support all of those outsiders who even your trusted friends and advisers might say do not belong.

For those who are not ready to publicly celebrate or who do not feel safe at Pride for any reason my blessing for you is to find those trusted friends, mentors, advisers, and communities who are here ready to embrace you, protect you, and fight for you with everything we have. Shabbat Shalom and Pride Sameach! 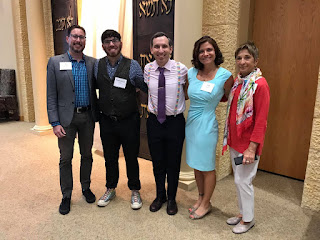