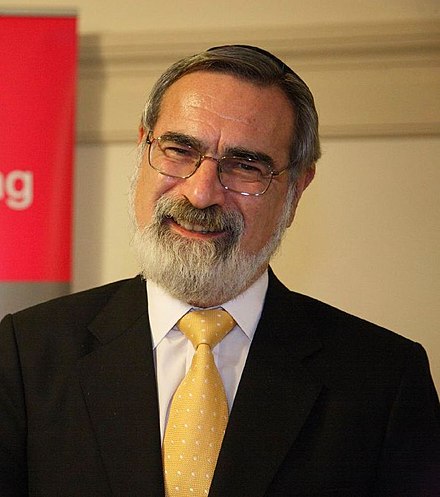 This message was shared by Elizabeth Sembler on November 28, 2020. She began:

Earlier this month, the world lost one of our G’dolei Hador, a giant of our generation, when Rabbi Lord Jonathan Sacks died Nov. 7 in London at the age of 72.  He had been the Chief Rabbi of the United Hebrew Congregations of the Commonwealth, essentially the chief Orthodox rabbi in the United Kingdom from 1991-2013,and was Emeritus Chief Rabbi when he died.  He was knighted by Queen Elizabeth in 2005, hence the Lord part of his name. Prince Charles, the Prince of Wales, said in praise of the Rabbi when he retired in 2013, that he was a "light unto this nation", "a steadfast friend" and "a valued adviser" whose "guidance on any given issue has never failed to be of practical value and deeply grounded in the kind of wisdom that is increasingly hard to come by".

In his career, Rabbi Sacks led congregations, wrote many books, taught, lectured, traveled the world with other religious leaders, met with politicians, and delivered a message of hope and healing that resonated with Jews and non-Jews globally. He worked for interfaith understanding and against antisemitism.  You can learn more about him and his message on his website, Rabbisacks.org.

I first learned about Rabbi Sacks about 10  years ago,  from  my fellow congregant at CBI, Barry Augunbraun, alav hashalom, who suggested that I read Rabbi Sack’s book To Heal a Fractured World: The Ethics of Responsibility. I loved the book, and a few years later, I bought another one, Future Tense: Jews, Judaism and Israel in the Twenty-First Century. I put it on the stack on my nightstand and it sat there for some time, a few years maybe, until I picked up on a recent Shabbat afternoon and started to read it.  The day I picked it up to read was on November 7, the very same day Rabbi Sacks died, which I did not know at the time and wouldn’t know until the next day. Timing is an unusual thing…

Rabbi Sacks had an ecumenical approach to society, culture, and religion, and so many beyond the Jewish world learned from his wisdom.  He delivered a lecture to the general public in 2017, a Ted Talk if you are familiar with that program, about how we – people of all religions and backgrounds - can face the future together, without fear.  It’s brilliant and accessible to all, not just us Jews.

Given that we just celebrated Thanksgiving, I thought I’d share just a few of Rabbi Sack’s teachings this morning, about our responsibility to others, about Tzedakah, and Chessed, and in particular how GIVING to others in turn gives us our humanity and keeps us alive.

In the TED talk I just referenced, Rabbi Sacks urges us to turn away from our culture’s hyper-focus on the self, epitomized by the cell-phone selfie that has become ubiquitous, and turn to the other. Wherever you encounter the word “self”, he said, substitute the word “other”. Instead of self-help, other-help; instead of self-esteem, other-esteem.

The acknowledgement, assistance, and lifting up of the other in need is a key part of Rabbi Sack’s teachings.

In To Heal a Fractured World, Rabbi Sacks writes:

“To know God is to act with justice and compassion, to recognize His image in other people and to hear the silent cry of those in need.”

This, he says, not only benefits the recipient, but elevates the giver as well.

And to demonstrate this point, he shares a teaching about the geography of the land of Israel:

Writes Rabbi Sacks: “There are two seas in Israel, the Dead Sea and the Sea of Galilee. The latter is full of life: fish, birds, vegetation. The former, as its name suggests, contains no life at all.  Yet they are both fed by the same Jordan River. The difference is that the Sea of Galilee receives water at one end and gives out water at the other. The Dead Sea receives but does not give. The Jordan ends there. To receive without reciprocating is a kind of death. To live is to give.”

Rabbi Sacks notes that one aspect of Jewish law on Tzedakah is particularly noteworthy: even a person dependent on tzedakah must himself or herself give tzedakah.  The rabbis understood that giving is an essential part of human dignity.

Rabbi Sacks wrote a weekly commentary on the Torah portion, which you can find on his website.  For Parshat Trumah, which is in the book of Exodus, he focused on the word Trumah itself. To remind, in this portion, the desert-wandering children of Israel are instructed by Moses to bring gifts so that the mishkan, the transportable tabernacle, can be constructed.

“ [Terumah] is usually translated as an offering, a contribution. It really means something we lift. The paradox of giving is that when we lift something to give to another, it is we ourselves who are lifted. I believe that what elevates us in life is not what we receive but what we give. The more of ourselves that we give, the greater we become.”

This past May, Rabbi Sacks spoke on BBC Radio and shared his thoughts about the coronavirus pandemic. He referred to the uplifting that occurs when giving to others.

“One of the enduring memories of the coronavirus period will be the extraordinary acts of kindness it evoked, from friends, neighbours, and strangers, those who helped us, kept in touch with us, or simply smiled at us. When fate was cruel to us, we were kind to one another. Human goodness emerged when we needed it most.

Kindness redeems fate from tragedy and the wonderful thing is that it doesn’t matter whether we are the giver or the recipient. Lifting others, we ourselves are lifted.”

Rabbi Sacks published his latest book this fall.  It is titled Morality: Restoring the Common Good in Divided Times.  In the very last paragraph of the book, as he closed his epilogue, Rabbi Sacks wrote  about post-pandemic opportunity:

“As the world recovers from the pandemic, we can work to rebuild our societies the way they were, or we can use this rare moment to enhance the structures of our togetherness, a togetherness that had been weakened by too much pursuit of self.  The choice is ours and the time is now.”

Rabbi Lord Jonathan Sacks… a gadol hador who lived and gave so that we could all be lifted up, enriched by his wisdom and teaching.  May his memory be for a blessing.